She Toppled the Wall

Shani Elitzur of the Technion, who recently received a research grant from the Ministry of Science, won third place in the international Falling Walls Lab competition

Shani Elitzur, a doctoral student at the Technion Faculty of Aerospace Engineering, won third place in the finals of the international Falling Walls Lab competition, which took place this week in Berlin. Elitzur, one of the competition’s 100 finalists, presented innovative technology for the production of hydrogen energy that could reduce dependence on oil through the use of hydrogen-based propulsion. 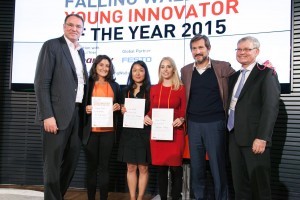 The three winners, together with the organizers of the competition

First place went to Sabrina Badir of the ETH Institute for Mechanical Systems in Zurich, for technology for the prevention of preterm birth, and second place went to Lian Willetts of the University of Alberta in Canada, for predicting prostate cancer metastasis on the basis of a single drop of blood.

Shani Elitzur recently received a grant from the Ministry of Science for developments in the field of alternative fuels for transportation – a NIS 300,000 grant that will enable her to continue her research. According to the Ministry of Science, Elitzur’s research program has demonstrated applied feasibility, which could soon lead to a development with commercial potential. Science Minister Ofir Akunis said in response to Elitzur’s win that “The ministry will continue to do much for the advancement of women in science and to support them on their way to a breakthrough.  Elitzur’s win is not accidental – she is part of a growing number of women in Israel whose achievements in science, technology and innovation are a source of pride.”

Shani began her studies at the Technion as a member of the IDF Academic Reserve, and went on to earn a master’s degree and a doctorate. In her doctorate, under the guidance of Prof. Alon Gany and Dr. Valery Rosenband, she is developing an innovative technology for producing energy from hydrogen. According to Elitzur, “The idea of producing energy from hydrogen is not new, but since the density of hydrogen is low, its storage requires very intense compression or cooling to very low temperatures.  These limitations, along with the safety aspects associated with the use of hydrogen, are the barriers currently preventing the extensive civil use of hydrogen energy.”

In light of this fact, the Technion Faculty of Aerospace Engineering has developed a ‘portable plant’ for the production of hydrogen onsite – i.e. inside the car – without the need for storing it. The method is based on the interaction between aluminum and water in the presence of a very low dosage of an activating substance (2.5%). The electrical energy generated by the aluminum-water technology is higher by an order of magnitude than the electrical energy obtainable with the existing storage technologies, including lithium batteries.”

Falling Walls Lab is an international competition with the participation of 35 countries, and has been held in Berlin since 2011. The competition is intended for students for all degrees and for young (up to age 35) industrialists, entrepreneurs and faculty members.  It is an interdisciplinary format which gives contestants the opportunity to present ideas, developments and inventions within a timeframe of just three minutes.  The name of the competition is a tribute to the fall of the Berlin Wall, and the basic idea is that contestants will present breakthroughs that constitute breaking down ideological, technological and other “walls”. Elitzur took part in the international finals this week after having won first place in the Falling Walls Lab Israel competition two months ago. Falling Walls Lab Israel was held at the Technion as a joint initiative of the Technion Computer Engineering Center, the Bronica Entrepreneurship Center at the Technion, and Hebrew University of Jerusalem.