Home About the Technion

The First University in Israel 1924 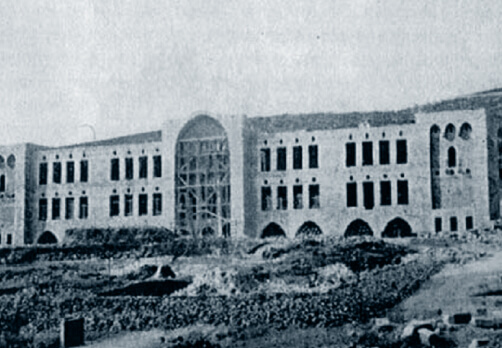 From Technion to Tech Nation: An academic trajectory intertwined with history

When the doors of the Technion, previously known as the Technikum, opened to students in the winter of 1924/1925 – a dozen years after the first cornerstone was laid on Mount Carmel – no one could have fathomed the impact that the Institute would have on Israel’s social and economic development and global intellectual and scientific advancement.

Technion graduates, researchers, professors, and students have played pivotal roles in the enrichment of knowledge and the human condition on both local and global scales, accounting for more than 50% of the startup founders in Israel’s wildly successful high-tech sector and at least 50% of the nation’s engineers.

The history of the Technion begins in 1901, half a century before the establishment of the State of Israel, in the halls of the Stadtcasino Basel, where the Fifth Zionist Congress was unfolding. There, three Jewish intellectuals – philosopher Martin Buber, biochemist and the future first president of Israel Chaim Weizmann, and journalist Berthold Feiwel – brought to the attendees’ attention the necessity of adopting a program of Hebrew culture, including the establishment of an educational institute for engineers to support the development of the future state. In 1908, the German-Jewish organization Ezrah Association, headed by Dr. Paul Nathan, set out to raise funds toward establishing what is known today as the Technion – Israel Institute of Technology. 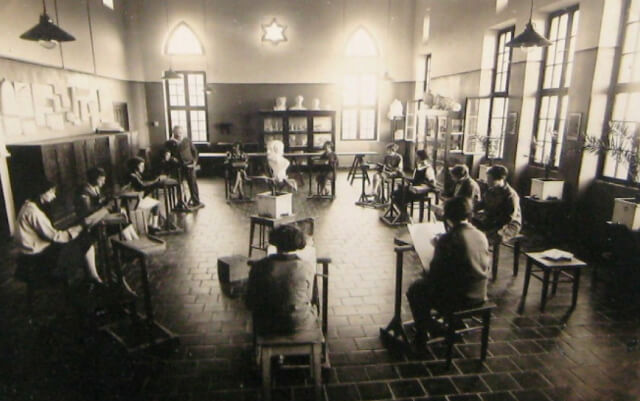 Fast forward to the winter of 1924/1925, when classes in civil engineering and architecture finally commenced in the Technion’s original building, designed by the Berlin-born architect and early Technion professor Alexander Baerwald. Just the year before, the great physicist Albert Einstein visited the campus together with his wife Elsa and founded the first of many future Technion Societies in Germany, hosting the group’s meetings in his home. The former British Prime Minister and then Foreign Secretary Lord Arthur James Balfour visited the Technion building in the spring of 1925, noting to much fanfare that the institute represented a vision for the development of the State of Israel, but also for the future, as a beacon of progress in teaching practical sciences.

In 1929, the first graduating class of 17 students – 10 engineers and 7 architects, including one female architect – were granted their diplomas, beginning a tradition of academic excellence that would continue to thrive in the next century.

By the time World War II broke out in 1939, the Technion was already a flourishing academic institution with 500 students enrolled, the majority of whom immigrated to Mandatory Palestine from Europe. The war inevitably slowed enrollment as students enlisted to fight against Nazi Germany, but classes did not come to a complete halt, thanks to professors and industry leaders, such as Solel Boneh, who donated funds to help students continue their studies despite the wartime conditions. During the War, Technion workshops were used to repair and supply spare parts for British ships damaged at sea. Already at this early date and prior to the declaration of the State of Israel, Technion faculty were publishing academic articles in prestigious scientific journals. 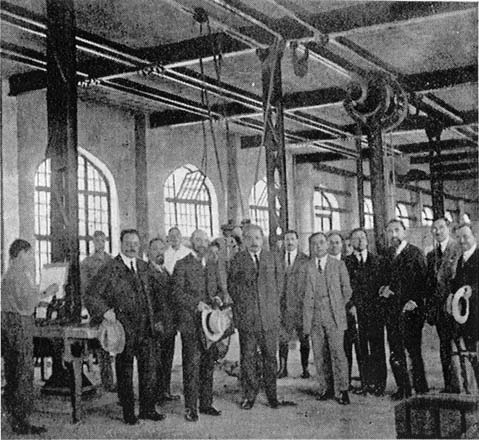 Prof. Albert Einstein, founder of the first Technion Society, on-site at the workshops of the historical Technion building in Hadar

After World War II, the fight for independence from Britain officially began. When independence was won in 1948, it was in large part due to the engineering genius and technological prowess of the Technion’s students, graduates, and faculty. It was clear from the very beginnings of the State of Israel that the Technion would be the nation’s backbone as it established its infrastructure, security, and economy – just as the thinkers at the Fifth Zionist Congress had intended.

Blossoming into an intellectual cornerstone in the Middle East

In 1949, the Department of Industrial Technology was divided into two units: the Faculty of Electrical Engineering and the Faculty of Mechanical Engineering, resulting in five academic faculties at the Technion. As the student body grew and the topics of study expanded, it was clear that the original building (now serving as The Israel National Museum of Science, Technology, and Space – Madatech) would no longer suffice, therefore, a new campus in Neve Sha’anan was established in the early 1950s.

The 1950s saw physical expansion, and the opening of additional academic departments and the Technion’s first research facilities. Former Chief of Staff of the Israeli Defense Forces Yaakov Dori was named President in 1951, serving until 1965. Also in 1951, under President Yaakov Dori, the Faculty of Science was set up, comprising four academic divisions: mathematics, chemistry, physics, and mechanics.

In 1952, the Israeli government asked the Technion to establish testing centers in different fields to support the development of Israel’s infrastructure – a framework for research and development that has lasted 70 years and is known as the Technion Research and Development Foundation (TRDF). TRDF and its technology transfer arm, T3, invest in entrepreneurship, patents, and startups coming out of the Technion. The Department of Aeronautical Engineering (now known as the Faculty of Aerospace Engineering) was founded in 1953, followed by additional faculties and divisions.

During the 1960s, the Technion was one of the first universities in the Middle East to open its doors to students from developing nations in Africa and Asia, with faculty providing technological assistance to various countries through the United Nations and other international and inter-governmental organizations.

In 1962, former Prime Minister Ben Gurion received an honorary doctorate in architecture, recognizing his immense contribution to the development of the state and the Technion.

Advancing human health since the 1960s

During the 1970s, despite the tumult of war in the region, the Technion continued to pave the way forward with cutting-edge research and technological solutions such as desalination. The Faculty of Biology was established in 1971. In 1973, over 1,800 approved research projects were being carried out by Technion staff and 1,100 research theses were pursued by graduate students. At the time, the Institute’s major research centers blossomed to cover nearly every aspect of Israel’s industrial, agricultural and defense needs.

A powerhouse of science, engineering and medicine

The 1980s saw continued progress and advancement in the Technion’s scientific achievements, which would go on to be the basis for Israel’s first Nobel Prizes. Early in the decade, Irwin A. Rose, Avram Hershko, and Aaron Ciechanover published two papers on energy-dependent intracellular proteolysis, reporting that the process for breaking down proteins was more complicated than previously accepted models. In 1982, Technion scientist and future Nobel Prize laureate Dan Shechtman first observed the ten-fold electron diffraction patterns of the quasicrystal while conducting a routine study of aluminum-manganese alloys at the U.S. National Bureau of Standards. In 1978, Abraham Lempel and Jacob Ziv, two of the “founding fathers” of Israel’s high-tech movement, published their groundbreaking paper on data compression using the LZ77 algorithm they had developed. The algorithm is well-known for birthing the popular PNG, ZIP and GIF formats.

In 1987, research at the Technion accelerated in the field of optoelectronics, or studies and applications for light-emitting devices, leading to the inauguration of the Barbara and Norman Seiden Advanced Optoelectronics Center in 1989. The Center aimed to facilitate multidisciplinary research partnerships and attract Israeli researchers who had departed during the “brain drain” back to the country by establishing the Technion’s reputation for its world-class laboratories and computational research.

In addition, during the 1980s, the Technion’s role in the formation of Israel’s dynamic high-tech scene began, with applied research in the fields of computer science, electrical engineering, semiconductors and fiber optics, accounting for the development of pioneering technologies that would become the basis for the nation’s first high-tech exports.

The mass immigration of researchers, scientists and intellectuals from the former Soviet Union in the 1990s significantly increased the number of students and teaching staff, resulting in a campus expansion program and the construction of the new home of the Henry and Marilyn Taub Faculty of Computer Science, among other capital projects.

In 1995, the National Center for Research and Analysis of Proteins opened in the Faculty of Biology. Multi-sector partnerships were initiated with pharmaceutical and biotechnology companies, an indication of the Technion’s role in establishing Israel’s expertise in biomedicine.

The TechSat-Gurwin II satellite was launched from Baikonur space station in Kazakhstan in 1998, becoming one of the first satellites to be launched by an academic institution and a showcase for the Technion’s important collaboration with industry and the local and international scientific community. The project was designed by experts and students from the Technion and the Israel Space Agency, Israel Aircraft Industries, and from the IDF Research and Development Administration – an example of successful and close cooperation between the Technion and Israeli industry.

Also in 1998, Prof. Joseph Itskovitz-Eldor of the Faculty of Medicine was on the international team that first discovered the potential for the use of stem cells to form tissue and established the Technion’s first stem cell laboratory.

If the start of the 20th century saw the opening of the Technion’s doors, the beginning of the 21st century saw the university’s academic, scientific and intellectual achievements recognized, with three Technion researchers and one Technion graduate receiving Nobel Prizes in Chemistry.

At the urging of leading Technion scientists and professors, the Russell Berrie Nanotechnology Institute (RBNI) was opened in 2005 to explore the field of nanotechnology and related applications, such as nanoelectronics, nanomaterials and nanomedicine. RBNI engages in multidisciplinary research to empower the field of nanoscience that has applications in a wide range of fields, including life sciences, electronics, ecology, computer science, and more. The contribution by the Berrie Family to fund the construction of the nanotechnology center was recognized by naming the central promenade of the Neve Sha’anan campus after Russell Berrie, and in the creation of a stunning kinetic sculpture by the architect Santiago Calatrava in the shape of an obelisk, which stands at the heart of campus.

In 2006, a novel drug to treat Parkinson’s disease, Azilect® (Rasagiline), was approved by the American Food and Drug Administration. Azilect® was developed by Profs. Emeritus Moussa Youdim and John Finberg of the Ruth and Bruce Rappaport Faculty of Medicine, along with Teva Pharmaceuticals, to treat Parkinson’s disease throughout its various stages.

Also in 2006, the Lorry I. Lokey Interdisciplinary Center for Life Sciences and Engineering was launched. Its goal: establishing, fostering, and enhancing new multidisciplinary research activities, aiming to apply engineering tools to life sciences.

The Stephen and Nancy Grand Technion Energy Program (known as GTEP) was established in 2007 to fuel research into scientific and technological applications for energy generation, including the development of fuel cells, and the splitting of hydrogen, among other projects contributing to sustainability and energy.

The aughts have also seen the extension of the Technion’s academic prowess across borders, with campuses opening internationally in the U.S. and China. 2009 was the first year of Technion International, a program offering courses entirely in English for international students.

In 2012, the Technion and Cornell University won a bid to establish a new applied science and engineering institution on Roosevelt Island in New York City, known as Cornell Tech, which includes the Jacobs Technion- Cornell Institute. The Institute aims to transform industries using technological innovation, deep-tech startups, and skilled talent, including an Urban Tech Hub to foster tomorrow’s leaders in urban technology and sustainable solutions.

In 2015, the Li Ka Shing Foundation and the Technion established the Guangdong-Technion Israel Institute of Technology (GTIIT) in southeastern China. The university offers bachelor’s, master’s, and doctoral degrees in a range of fields, including mathematics, chemical engineering, biotechnology and food engineering, materials engineering, mechanics and aerospace engineering, which are accredited by the Technion.

In 2018, the Hellen Diller Quantum Center was established, focusing on quantum mechanics applications in computing, communication, sensing, and signal processing, while cementing the Technion’s role as one of the world’s leading academic and research institutes in the field.

A beacon of coexistence and diversity

Today, with over 15,000 students, 17 faculties (and one academic department), and 60 research centers, the Technion encourages its students and faculty to break paradigms and fuse creative thinking with technology. A diversity of viewpoints and origins is key to the Technion’s success, with a diverse student body of all religions and backgrounds.